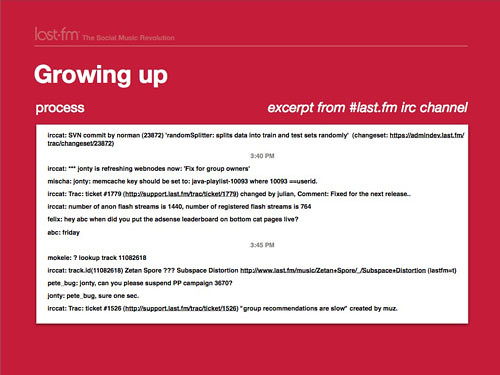 I find myself talking about Twitter quite a lot. I’m not the only one. The behaviours that Twitter has made more visible are tremendously interesting.

Knowing these details creates intimacy. (It also saves a lot of time when you finally do get to catchup with these people in real life!) It’s not so much about meaning, it’s just about being in touch.

It’s basically blogging reduced to what the Russian linguist Mikhail Bakhtin called ‘the phatic function.’ Like saying “what’s up” as you pass someone in the hall when you have no intention of finding out what is actually up, the phatic function is communication simply to indicate that communication can occur. It made me think of the light, low-content text message circles Mizuko Ito described existing among Japanese teens – it’s not so important what gets said as that it’s nice to stay in contact with people. These light exchanges typify the kind of communication that arises among people who are saturated with other forms of communication.

intimate sharing / presence sharing intimate photos on the handset when talking face to face with people. Photos that fall into this category would be photos of partners, family, pets, etc. However, this can also be very every day stuff eg. what I’m having for dinner. It is sharing ongoing mundane visual information with intimates, creating a sense of presence in other peoples lives without needing to talk or be physically present.

I think that the simplicity of Twitter is key to it’s success. The messages must be short and they’re simple text.  I’m starting to think that the level of stimulation is key to the success of these ‘osmotic’ communications (as theÂ guys from LastFM referred to the IRC channel they use internally).