Words are pegs to hang ideas on – Henry Ward Beecher

It is not unusual for me to be involved in a debate about words.Â Words I am frequently pedantic about include user research, user testing, user experience and user centred design. I think that the words we use matter. TheyÂ do more than just define what we see and do, they help us understand what we think about those practices.

It’s always interesting to me to see who finds these discussions useful and who doesn’t.Â I’ve found that peopleÂ I’m working with who are less familiar with design, research, user experience find theÂ definitions useful. Within our teams we have to correct ourselves often, change what we called things before, get rid of previous habits of language, but that’s a good thing – every time we remember, we remind ourselves of why we use the language we use (because we’re testing ourselves and not our users, for example).

Interesting, the people who get stroppy about the definitions and say that it doesn’t really matter tend to beÂ people who haveÂ been involved in the ‘user experience’ community for at least five years. I guess they have a vested interest in not being seen to be wrong. Or, perhaps more generously, theyÂ are just so close to the subjectÂ that anyÂ word will always be an oversimplification of all the beliefs, attitudes and practicesÂ of their work.

If you want to know what an organisation really believes in, look at the language they use in their day to day work – in their meetings, in their documents, in what they call things.

There are people, like Gill Ereaut, who do this as their full time job – they do linguistic analysis to help companies try to join up what they ‘officially’ say they are trying to do (their official language) with what people actually say as they go about their day to day work (the surface language).

Language is the medium through which culture is enacted – Gill Ereaut

A mismatch between surface and official language is a signal of ineffectiveness in an organisation. There can also be lots of different surface languages in different parts of the organisation that makes it even more difficult for communication across the functions and increases the impact of silos (for example marketing speaks a totally different language to the tech team).

Organisations who are thoughtful about the words they use repeatedly are more able to have a more consistent culture that allows their strategies to come to life in the products and services they create and the way they interact with their audience (this worksÂ even if those words might appear artless, like ‘show the thing’, something people at GDS say all the time and even have a poster for) 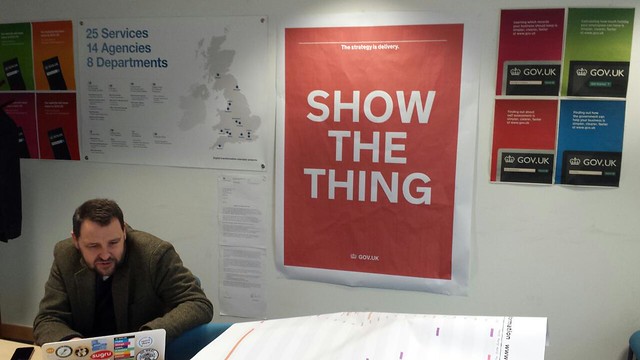 Changing the words on the hymn sheet wonâ€™t create a whole new religion, but, as Gill says,

â€˜linguistic change at the surface level affects the assumptions held by the organisationâ€™.

In her talk at Design of Understanding conference in 2012, Gill (yes, I am a bit of a fan) talked about an organisation where she’d done some linguistic analysis. This was an organisation that believed that they cared about good quality customer service, but analysis of the way the organisation communicated showed that actually, they were afraid of their customers – they were distant from and lacked empathy for their customers, making it almost impossible for them to really deliver great customer experience.

Every day, in the words that organisation used, in the names of their processes and documents, in the way they communicated with each other, they were entrenching this fear of the customer that made it impossible for any corporate level ‘Customer Experience’ strategy to be effective.

Words canÂ remind us many times a dayÂ what we all care about and what we believe in.

Changing the words we use can help us to change our culture in tiny moments every day and help us to be more able to implement strategy effectively.

Calling it user research instead ofÂ user testing won’t change the way the moderator runs the session or the experience of the research participant. As the person who is running the sessions, it probably makes no difference to your competence what you call it. But deliberately deciding to call it user research even though your reflex is to call it user testing means that every time you choose to use the words we’ve agreed on, you are also agreeing, once again, to the reason we chose those words – because we’re testing ourselves, our work, our design, our services and not our users. Because we are in service to our users and if they don’t understand, that reflects poorly on us and not them.

Being thoughtful about words seems to be one of the simplest and least confrontational yet most powerful ways to transform organisations in tiny moments every day. Teeny, tiny momentsÂ of strategy everyone in the organisation can implement every day.

Thus, words being symbols of ideas, we can collect ideas by collecting words. The fellow who said he tried reading the dictionary but couldn’t get the hang of the story simply missed the point: namely, that it is a collection of short stories. – James Webb Young, A Technique for Producing Ideas

This is the sixthÂ post in a series of rambles around the topic of strategy in the general vicinity of user experience which Iâ€™m posting as a kind of obituary to the book I almost finished writing then realised was pretty much completely wrong.

I’ve been writing this instead: