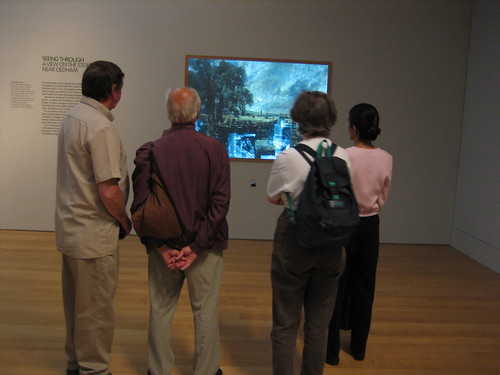 In the last couple of weeks I’ve been out in the wide, wide world and experiencing my technology in the wild, amongst all those ‘users’ that we theorise about all the time.

Along the way, there were a few moments that really highlighted for me how much work we have to do to make technology something comfortable for everyone to use, and how much distress technology can cause when we don’t understand it, or it doesn’t work as it should.

Episode 1: Where does email live?

The most disturbing was in an internet cafe down the road (a regular haunt of mine lately) where I was seated beside a girl who was trying to book a train ticket online for herself and her mother. They had to get the train that evening.

She was going through the process just fine until she realised that they were going to email her an electonic ticket and she would have to access her email in order to get the ticket. Not a problem for most of us, but for this poor girl, her email was firmly grounded in her computer at home, and so she was pleading with the staff of the internet cafe to give her their email addresses – thinking that they would be the only people able to access their email and thereby print her ticket.

I’m not sure what she thought all the people sitting around her typing passionately into hotmail etc. were doing.. I think she was focussed on her task. She was extremely distressed.

In the pub the other afternoon (enjoying being able to be in the pub on a weekday afternoon before I started fulltime work again!), behind me was sitting a woman in her early thirties who was bemoaning the popularity of SMS. Lots of her friends contacted her on SMS and she hated it, because she found it so difficult to use that responding to their messages was a very slow, deliberate and painful process.

She said (I eavesdropped) that quite frequently she would take so long to compose a message that she would be interrupted and forget what she was doing and think that she had sent the text message when in fact, she hadn’t even completed it. Just last week, she said, had she discovered predictive text messaging (although, she described it in rather different terms).

She felt that her lack of proficiency in text messaging was impacting her ability to communicate with her friends. That they were contacting her less because she was slow to respond. That their conversation was one sided and stilted (because unlike her, her friends were highly proficient with SMS).

She wondered how she would ever learn all the tricks of SMS and moaned that her phone was so difficult to use. (I didn’t get to hear what brand of handset she had).

The other day I went to the Tate Britain, an excellent Art Gallery in London. I saw a great exhibition of John Constable’s work (I’d recommend it to anyone in the vicinity – yes, I know John Constable is notoriously boring, but this is a great insight in to how he created his work – go see it!).

At the end of the exhibition was the ‘interactive room’ with two digital interactive pieces. The objective of these pieces was to reveal some of the process that Constable went through in planning and preparing for his artwork. You stand in front of the ‘painting’ and the painting senses where you are, and reveals beneath the ‘painting’ the equivalent sketch that was made for the artwork – kind of like an x-ray. (No, it wasn’t a particularly inspiring interactive exhibit – see picture at top).

What I learned, because I’m not afraid of interactive exhibits or looking like a goose, is that standing in front of the ‘painting’ actually doesn’t work. In fact, you needed to ‘move’ quite quickly in front of the work in order to create the ‘x-ray’ effect.

Very few people would have learned this though because they mostly stood much to far away from the work for it to react at all. And those who did approach it did so timidly – precisely the opposite way to achieve the desired effect.

People didn’t interact with this work, they watched it.

Thoughts on these episodes

Had I not been out ‘in the wild’ of late. Had I been sitting at my desk pondering projects. I believe that my thoughts about people like this would have been that they were annoying, minority, ‘out of target audience’ users. But there are lots of them out there. And they don’t get it. Things that we take for granted that *everyone* gets – because everyone has a hotmail account and everyone sends texts… they don’t. Lots don’t. Lot’s don’t even understand how it might work.

It makes me think a lot about who we design for, and how difficult it is to ensure that we’re designing well both for those who are highly confident and proficient, and ALSO for those who don’t even have a correct mental model for how a particular technology works. It’s made me think about design ‘safety nets’ that go much further than having a ‘help’ link in the footer that probably isn’t very helpful, or giving a phone number but charging people more for the services they need if they call the number.

It’s made me think about my gut response to think that these people are such a minority that they don’t matter. How often they end up out of scope.

It made me wonder if I design responsibly.

It made me remember all the times that I’ve thought ‘to hell with users who don’t get it’ whilst working on an interface that was much more interested in being sexy.

It made me think about when we decide accessibility is out of scope.

It makes me wonder how we can still do sexy things, but support everyone who needs supporting.

It makes me think about how this problem might go away because young kids are so good with technology and they’re ‘the future’.

It made me remember that the proportion of the population who even have access to a telephone, let alone a computer, is pretty small. And these people will come online soon enough – with no experience.

It makes me ask lots of questions. I’m not at the answer stage yet. But I hope I’ve lost my hard outer shell for a little while at least.

What does it make you think?

(Hellooo! is anyone still out there! It’s great to be back, I’ve missed you guys! I have a million emails and about the same number of RSS feeds to catch up on, so forgive me if I’m a little slow on the uptake on anything (including getting back to you!))

3 thoughts on “technology is hard and scary (part 1)”