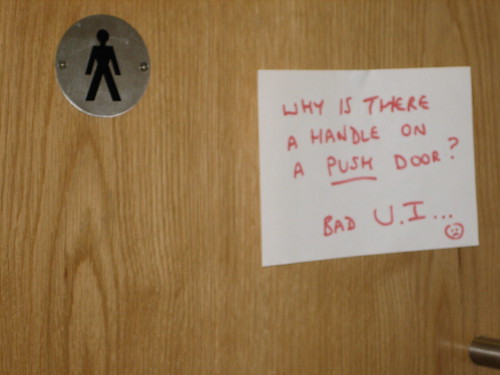 I’ve been busy at BarCamp London the last few days and managed to miss out on the hubbub around the lack of women speakers at Office 2.0.

As you’d expect, women were significantly under-represented at BarCamp. On the upside, the girls that were there seemed were mighty smart and interesting, and they all got up and did their bit (as you do at BarCamp). Also, there was never a queue for the loo :)

… perhaps women just didn’t want to come to BarCamp, and perhaps they don’t want to get up and speak?

I know lots of women who work in technology, but I know *very* few who would be willing to give up their weekend to come to something like BarCamp.

These are the same women friends of mine who aren’t blogging. They’re too busy doing their work and then getting out the door and having a life. And it’s not because they don’t *know* about blogging, or they don’t have access or technical ability. Lots of them have had a go at blogging and just aren’t that into it.

These women are different to me. I spend way too much time online, reading all your blogs, writing my own, going to BarCamp. I’m willing to scare myself crazy with fear and hop up and speak so that I get to meet more people, share my ideas with them and learn from them. But lately, I really feel as though I’m a minority (amongst the people that I know in the *real* world… the blogging world, obviously, is skewed).

I’m just thinking, perhaps we’re fighting a battle for a tribe who aren’t really interested in the war?

Which leads me to the other point… I know that in lots of cases, people who are organising conferences just don’t think to invite women. (I’m thinking, if they don’t *know* any women, isn’t this a *great* opportunity to meet some?!).

In lots of other cases, though – you ask the organisers if they’ll let you speak.

At this very moment, you could be writing up a proposal to get up in front of the UPA Conference and the IA Conference next year. I wonder how many women are writing up their proposals, or how many (like me!) are thinking that they don’t really have anything interesting or important to say.

If you’re a woman, and you know a thing or two about Information Architecture or Usability/User Experience – have you thought about putting together a proposal?

(And yes, I know there are a few women who hop up every year and do a fantastic job. I hope they keep doing that. But I’d love to see more.)

So, here’s what I’m thinking. Yes, there should be more women at conferences – both attending and speaking, but there’s more to it than that. Lots of conferences just aren’t so interesting. And lots of women don’t think they have to say that other people would find important or interesting.

Perhaps if we focus on those kinds of issues, the problem might go away?

Update: Just going through my RSS feeds – of course Robert Scoble couldn’t stay out of the debate…. but here’s the thing – he virtually offers an invitation to women to put their hand up to be on his new show – lots of heated debate later, there are only two women who have done anything like say ‘pick me’. I’m sure a lot more men than women read Scoble… but surely lots of the women who do would fit the geek profile he’s after? or not.

14 thoughts on “perhaps the women have something better on…?”