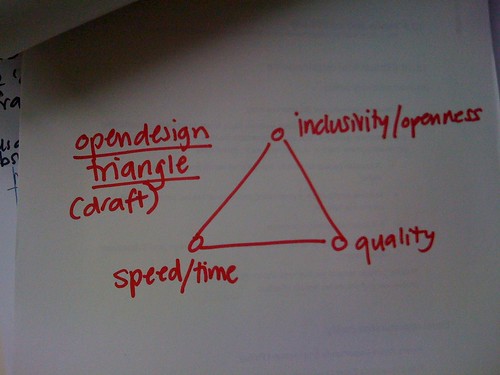 I’ve been known to say in public places that designing with a community is nothing like design by committee. And, certainly that’s been my experience to date. Not to say that designing with a community is painless either! These days I feel as though I have a vast swathe of constantly raw virtual flesh put out for cutting. Checking email is a lot more scary now than ever before!

Recently we’ve been getting some feedback from within the Drupal community that our approach is not open enough. The designer in me finds this devastating – by ‘designer’ standard I think we’re already being profoundly open in terms of both the way that we’re working (our practice) and also what we’re designing (our output). But, by open source standards, I completely understand the feedback. Angie Byron (@webchick) recently left a comment on an earlier post that describes some of the issues that are emerging. I’ll quote a little from that now so you can get the picture:

On something like groups.drupal.org, everyone can be a content creator and make new posts which are equivalent to everyone elseâ€™s posts in â€œprimaryness.â€ While we have tools like â€œsticky postsâ€ to draw attention to particularly important things, everything else is open to everyone and has a real collaborative (if chaotic) vibe. This is more like â€œthe Drupal community show, with special guests Mark and Leisa.â€….

…. But yet, the current model feels to certain members of the community like â€œshout it out into the darkness and hope someoneâ€™s listeningâ€ collaboration paradigm, when theyâ€™re used to much more direct interaction like pinging webchick on IRC and saying â€œHey! Iâ€™m upset about something. Letâ€™s talk.â€

I can’t help but preface my response by saying that I’m usually available for hours at a time on IRC to Drupalers and more than happy to be pinged with this exact message, although having said that, I’m no @webchick in the Drupal community so completely understand why this hasn’t happened as much as it might.

I do want to share back some of my thoughts on ‘equivalence’ and ‘the Mark & Leisa show’, as the way that this is playing out is not entirely accidental and there is a certain amount of ‘design’ to the way that we are communicating within and outside of the Drupal community (having said that, it is a constantly evolving design and you are probably being party to a big evolution right now!)

Another thing I’ve been known to say in public places is that design projects like D7UX and the Drupal.org redesign project aren’t the kind of projects that can be initiated from within a community, that is organically and ‘bottom up’. I think it’s true. Look at the efforts of the hardworking usability team within the Drupal community – there are some very smart people there and they are working terrifically hard and making a big effort to improve the users experience of Drupal – one issue at a time (using the issue queue infrastructure typical to opensource development). They have certainly taken big steps to improve Drupal’s usability, but (and of course, this is open to dispute) I believe there is a fairly profound change that needs to come about in order for Drupal to achieve what I understand it would like to achieve – that is to make it’s powerful tools more available to people with less or different or, ideally, even no web development skills.

I wouldn’t like to say it was *impossible* for this to come about from within a large community, but I think it is self-evident that it is highly unlikely. It requires a different type of methodology to what is found in open source communities at the moment for this kind of change to be designed, at least, within any kind of useful timeframe.

We need to find a way for a good design methodology to work in an open source environment. That’s one great big hairy challenge.

Back in my ‘agency’ days, we used to use a diagram of a triangle to try to explain to our clients some of the facts of life around features and cost and time and quality, it is quite like the one I’ve included above except the three corners said ‘Time/Quality/Cost’ and the idea was that the client could choose to move two of the corners but that one had to remain fixed. The triangle couldn’t get any bigger but it could change shape.

I’ve been thinking about this model recently in terms of the way we’re working on the Drupal project, and for open source designing in general, and I think a similar principle applies, except that the corners are now labeled

In *this* project time also equates to cost (as we are being paid to work on the D7UX project) but obviously this is not always the case. And as with the commercial model, you can move any two of these corners but not all three.

Time is a massive issue for us in this project. I would estimate that at the moment we are spending at least 65% of our ‘paid’ time just ‘communicating’ on this project and just 35% actually designing. That’s scary for us – there is a lot to design and not a whole lot of time to do it. We would LOVE to be spending more time designing, but as I’ve said before, it’s fruitless and foolish to do so in isolation.

On top of this ‘paid’ time, both Mark and myself spend a lot of our own time on this project and in that time we are almost invariably blogging or in IRC or responding to email communicate we’re receiving on the project. I’d estimate for myself that I’m probably contributing an extra 20-25% of time beyond what I’m being paid to do on this project. That doesn’t make me any great hero, I know, but that’s the current landscape.

I’ve written in the past that I believe that design is no place for democracy. Open design is amazing because you can have so much feedback and insight piped in throughout the process, and as I hope is evident, we are doing everything we can to encourage this engagement in our process from the outset (where it is arguably most important).

However, design decisions at a system level (like the ones we’re working on at the moment) shouldn’t be made issue by issue and by consensus – not if you want a great design, a great user experience. A good design comes from a strong, unified vision that is articulated by experienced designers. The power of this clear design vision is that, going forward when design decisions do move down into issue queues (which, over time, they will), we are all able to discuss design issues and make design decisions more articulately and more effectively because of the foundations that have been laid, through the ground work that we are doing right now.

As I understand it, there are three main reasons why this impression is being created. Let’s look at them one at a time.

The way that we are currently engaging with the community is very different to the way the community currently gathers to discuss and resolve issues – which is very much consensus driven.

I cannot say often or loudly enough how much we crave communication with the Drupal community on this project, but in order for us to do our job well, we need to engage in a somewhat different way.

We can’t argue every single point at the moment that it is raised. Our process doesn’t work that way (we don’t know anywhere near all the answers at the moment, we’re still devising the strategy to make the questions that we’ll then set about answering, with the assistance of the community). Also, see ‘time’ above.

Having said that, I think that we are striving to work in a consensus driven way. We’re doing this by creating larger artifacts that we can gain consensus around. Things like our Experience Strategy, our Audience Matrix, our Design Principles for example, are ways that the community can gather around the work we are doing and we can get some kind of concensus about the best way to define our strategy.

In the recent release of our Initial Concepts, we specifically pulled out four artefacts for discussion, with the aim of gaining concensus around them before moving forward (being the header, the overlay approach, the inline editing and the ‘direct manipulation’ tool).

It may not look exactly like the way that concensus driven development works, but the principle still holds… at least, that’s the outcome we’re trying to achieve, within the contraints of time and quality (see above).

There is no right or wrong way to do this, yet. The work we’re doing on this project will, hopefully, be used as reference for future projects and I’m sure they’ll look at some of the things we’ve done and say – great! and others they’ll look at and say – rubbish! We’ll probably do this ourselves before the end is reached!

I’dÂ  love to find a way to more effectively synthesis all the feedback we’re receiving and to share that in a way that everyone can consume more readily. Again, I’m not sure exactly how to go about that yet, but I am fairly sure it’s not to just talk in one place.

We are listening. I think we need better ways to show that we’re listening. I’m not sure what those are yet. I’m going to think on that some more and I hope you do too and let me know what you come up with.

A final note on Fear
I wanted to wrap by sharing another part of WebChick’s comment, which resonated deeply with me.

some feel like they donâ€™t have expertise in this domain and are really intimidated to jump into the fray. Theyâ€™re scared to say anything bad because theyâ€™re convinced that their opinions will get immediately shut down, and that theyâ€™ll offend you guys.

So much of this project and this way of working is about fear. I know I feel terrified by this project almost every day I work on it, for so many reasons. And fear doesn’t often create a great environment for communication. I need to think about this some more (and no doubt have a whole other blog post brewing), but I thought it was worth throwing that out for your consideration.

Thanks for taking the time to read all of this. Be brave. I look forward to hearing your thoughts.

24 thoughts on “Openness and Effectiveness in Designing with a Community”