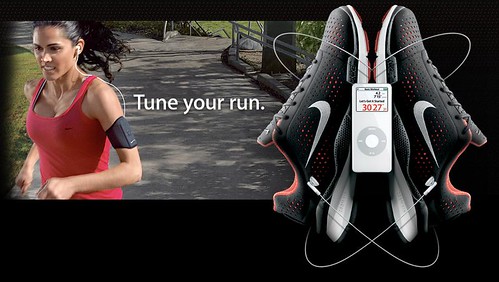 Every now and then, companies do really smart stuff. Apple are pretty well known for doing smart stuff, and Nike have also done lots of smart (or at least, expensive!) stuff online. And now, hoorah, they’re doing smart stuff together. I feel so proud and happy!

Nike and AppleÂ® today announced a partnership bringing the worlds of sports and music together like never before with the launch of innovative Nike+iPod products. The first product developed through this partnership is the Nike+iPod Sport Kit, a wireless system that allows Nike+ footwear to talk with your iPodÂ® nano to connect you to the ultimate personal running and workout experience. (Apple press release)

Why so? Because the user needs are so obviously at the centre of this product design. Clearly the product designers have thought about what they can do to support the goals that runners have, and they’ve designed a product that supports these goals.

Or, in Apple’s words, they’ve been working with Nike and:

Kevin Lim has a nice writeup on why this is more than an expensive pedometer.

If I were to start running, then the features that Kevin points out would be exactly the kinds of gimmicks that I’d quickly become addicted to. I’d love a soothing voice telling me how far I’d run and how far I had to go. Almost like a personal trainer but less annoying. And the breath I save from having no one to moan to will be better spent on helping me run further.

Feeling tired but not quite at the end of your run? Then get some particularly pumpy music and 3-5 minutes of running will magically be behind you before you know it. I *know* this works, because if I get a run of pumpy songs on my walk to work I get there five minutes earlier!

The only thing I’m not sure about is the community… but that’s just because my stats would be so embarrassing! All you fit people out there, you know you’ll love it. Just like those biking people constantly comparing how far and how fast….

Unfortunately, Nike doesn’t seem to realise that there is more to ‘global’ than the US… you get that. I suppose we won’t be able to buy the shoes in Sydney until sometime next year anyway… (and while I’m moaning… I don’t get why chicks can’t buy the black shoes… what’s with that?!)

I’m not sure how many shoes Nike will sell out of it … I reckon it’s just a matter of time before you can buy the sensor separately and put them into whatever shoe you want (at least, whatever Nike shoe you want… or perhaps some new running accessory we didn’t know we needed).

Still. I like it. It’s a partnership and a promotion that will make sense and add value to a lot of people’s lives. (At least, until the sensors start breaking and Apple won’t replace them!)
It’s certainly enough to make me happy to have a Nano, and likely to keep an eye out for the Nike shoes. Who knows… maybe even enough to make me run!

What do you think? Feeling motivated?