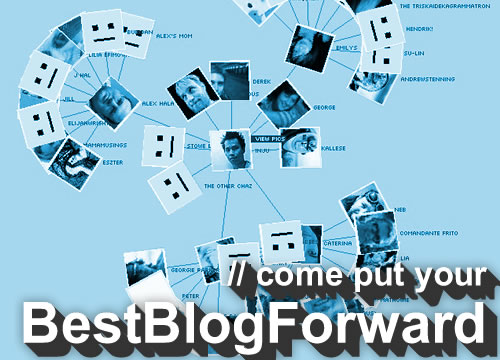 I mentioned before Kevin Lim’s BestBlogForward meme. Here’s my contribution :)

Judging by visits and comments, there are probably three blog posts that stand out as ‘most popular’ from this blog. They are:

Based on my experience with these posts… here’s what I’ve learned about how blog posts get popular. (Note: that’s very different to ‘how to write popular blog posts’. I’m not the person to write that post, I don’t think.)

What were the stories behind these posts? Well, I can honestly say that none of them were written with ‘traffic’ in mind. Each of them came from conversations I was having online and offline (Six Species, Women of 2.0), things that were bugging me at the time (Design is a good idea), or someone writing a blog post that consolidated some of my thoughts in a new way and inspired me to post my interpretation of what they were saying (User Experience & Cognitive Pleasure).

Based on my experience with TechMeme, I’d say that if you want to be ‘popular’, it’s probably not that difficult. Write about what everyone else is writing about as soon as you possibly can, and – with bit of strategic promotion and A-Lister flattery – get drawn into the linking maelstrom.

Is this what you want your blog to be though? For me, absolutely no. Occasionally there’s something ‘topical’ that I think is exciting or interesting or annoying, and that is relevant to the work that I do (or my life I guess). A lot of the time, the topics that the blogosphere carries on with are repetitive, reactive, and irrelevant to what I’m interested in.

For me, I’d much rather have a small band of people who read my blog reasonably regularly, and who find what I write to be somewhat thought provoking – either to help them think about something in a new way, or to introduce them to something that they might not have seen before. I’m much more interested in people reading and interacting in a conversation than I am in having thousands of anonymous visitors drop in for a moment, then drop out. (On a slight tangent, that’s why I don’t have Adsense or any other advertising on my blog).

So, popular blogposts. I like it when I have a post that’s popular because I get to ‘meet’ new people who find my blog that way… but I don’t write for popularity or traffic.

I’d encourage *everyone* to write for reasons other than popularity. But that’s just me.

If you *really* want to learn about popularity (and making money from your blog), go see Darren Rowse. (and ponder on the fact that 73%* of his readers are male… more on that later perhaps)

* based on results of poll at time of writing. Results were even more skewed towards men last time I checked so perhaps women bloggers just have better things to do on the weekend!)

8 thoughts on “my bestblogforward (how blogposts become popular)”