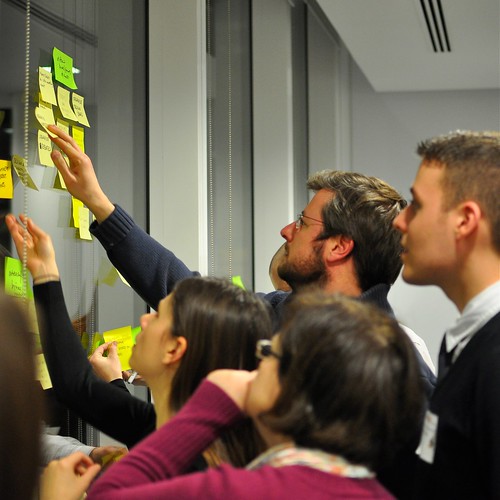 Having been a vocal critic of the UK UPA in the past (by which I mean the organisation and it’s activities over the past five years not the current or recently past committee), I was really pleased to be invited to facilitate a workshop or two at their March event ‘Crowdsourcing the future of the UK UPA’.

There were a wide range of workshops held that evening, the one I was facilitating was focused on gathering and prioritising concepts that the UK UPA could act on which would make it feel like a professional organisation that we felt more aligned with and wanted more to be a part of. There were two workshops and the participants included UPA stalwarts and newbies, UXers and ergonomists, people from London and beyond.

The workshop used an incredibly rapid fire KJ Technique formed of individually listing items relating to how engaging the UK UPA was/was not for us and why that was so, followed by a quick post up and affinity sort, dot vote for issues we felt most strongly about.

Both workshops were characterised by a mixture of frustration and an energetic desire to be more involved and for the UK UPA to continue to grow and be an influential voice and resource for people who are currently active or interested in usability.

Once we aggregated the issues that most resonated across the two groups, the following priorities emerged:

1. Let us contribute: It was noted that the activity that the UK UPA is able to achieve is limited by the time that the committed yet otherwise busy committee members are able to contribute. There was an almost universal desire for members to be able to contribute meaningfully – whether by contributing content, updating the website, setting up Special Interest Groups that could hold their own events, and many other ways.

This requires the UPA giving up a little control – the current model of ‘tell us you want to help and we’ll delegate something to you’ sucks the enthusiasm and motivation out of even the most committed UPA fan. The net benefit would be a much more active association achieving a lot more for and with it’s membership, and a greater sense of involvement and community amongst the membership.

2. Teaching people who are new to usability: there was a general perception that the UPA could play a big role in educating people about what usability is, what usability work entails and why this might be a rewarding career option for young people and career changers. There was a particular passion for outreach into schools but also for providing tools to help educate colleagues with other specialties.

3. Have an opinion: participants also expressed the desire the the UPA have an authoritative voice on matters relating to usability, particularly high profile and particularly contentious issues. People wanted to be able to turn to the UPA to see what they thought about things.

4. Different event formats: participants also expressed the desire to mix up the event formats a little so there was less ‘lecturing’ andÂ  more participation – debates, design jams, social events were suggested as options. Special Interest Groups were also mentioned in both workshops.

5. Learning more by sharing our experience: The ability to talk to each other, as members of the UPA and attendees at the events was something that participants would value – both online and offline. People wanted to be able to ‘find each other’ online after an event and continue conversations. An emphasis of events and content that showed real practice was also valued.

7. Who is the UPA? Participants wanted the UPA to more clearly articulate the position it wanted to occupy with our profession and the role it wanted to play and consequently, what our expectations should be. Development of a clear ‘value proposition’ or mission statement for the association.

8. More than just UX As a part of her introduction to the evening Chandra Harrison, current president of the UKUPA went to some lengths to make it clear to us that the UPA is about more than just usability. She may actually have gone so far as to provide the value proposition that people were looking for (ref: point 7 above) when she talked about the UPA being the organisation that brings together people from across all kinds of industries and professions who have an interest in making all kinds of things easier and better to use.

As it happens, participants (particularly in one group) found this a very appealing proposition and wished that they actually saw more content from across these various professions/practices as a part of the events program, more participation from people outside of UX at the events and more content helping us to understand the similarities and differences that are experienced across these audiences.

Another thing that Chandra made very clear in her introduction was that the committee are very time poor and already working very hard on projects for the UPA and that – although they were pleased to be holding this event and inviting ideas – they were not able to commit in any way to moving forward on any of the points that came out of the event. I understand from talking to members of the committee that many of the issues raised above are in the process of being tackled right now and, as it happens, by addressing the first one on this list, this problem actually starts to go away a little (although, no doubt, it also introduces a few more challenges).

Attending another UPA meeting confirmed for me though that actually achieving these objectives is going to require more than just a series of committee led initiatives, it’s going to require significant cultural change.

I’m optimistic that the very fact that events like this can take place under the auspices of the UPA is reason for us to have hope.

Why bother? Why do I care?

You may not identify as a usability professional. I don’t either. But we’re not the only ones who get a say in this. As long as other people look at what you do and call it usability (and you know a lot of people do), then this is our professional association.

Call yourself what you will, the way the UPA conducts it self is a reflection on anyone who rightfully or wrongfully gets lumped under the usability banner.

As long as this is the case, I want an association that I can be proud of. That demonstrates good usability practice in the way it presents itself online, that doesn’t feel completely out of touch with contemporary practice – UX, Ergonomics, whatever else you do that is affiliated with usability. I have enough on my plate trying to fight the good fight with people who don’t know any better, I should be able to count on the UPA to support me in this, not to undermine me.

So, this means that I’ll be critical. Constructively so wherever I can.

But it also means that if you want me to help out – and not just as someone you can delegate some tasks to, but on something that can actually properly make use of my experience, passion and abilities – then the UPA is welcome to call on me. As they did last week.

I hope you care too. And I hope the UPA can do exactly what it apparently wants to do – bring together people from all different professional circumstances who care about usability so we can learn more and do better and make this a better world to live in.

And on that evangelical note… why not go check out some more photos from the crowdsourcing night.