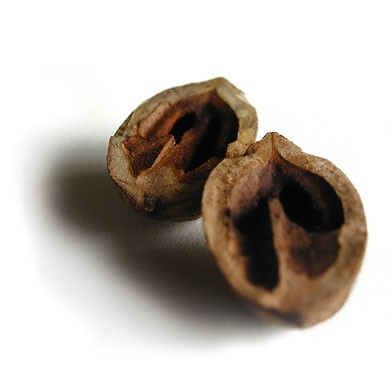 Cameron Reilly posted earlier a story that he heard somewhere about how to catch a spider monkey, or more importantly, how important it can be to let go of the nut.

In order to catch spider monkeys, hunters in South America simply walk through the jungle and drop heavy containers on the ground. These containers have very a narrow top and a wider bottom. Inside the containers the hunters drop a special kind of nut which is particularly attractive to the monkeys. Sometime later, the spider monkeys come down from the tops of the trees, smell the nut, but the tops of the containers are so narrow they have a tight squeeze to get their hands inside. Once they grab the nut at the bottom, their fist is too large to remove if through the opening. And the containter is too heavy for them to carry.

So instead of letting go of the nut, the monkeys just sit there until the hunters come back, pick them up, and throw them in a bag.

The spider monkeys are not prepared to let go of a small nut in order to gain their freedom.

This story and Cameron discussion around it, really resonates with me at the moment. There are some nuts that I’m kind of holding that I think I might need to drop. All of this discussion that I’m engaging with around process and documentation – that’s one nut. There are a lot of people out there who are clinging to the nut (the ‘old’, familiar process) and who are going to be trapped because they won’t let go… but then, at the same time, I think others have just grabbed another nut in place of the other (e.g. Getting Real methodology), which seems like a more attractive nut, but which is not necessarily a good nut. And probably not one worth getting trapped for. (Am I wearing this analogy a little thin?

I also wonder what other nuts I’m holding that I don’t even realise are the reason that I don’t see things with the clarity that I’d like to. That they way forward sometimes doesn’t seem as clear as it should be. That’s the problem that I’ve always had about assumptions… lots of the time, the problem with assumptions is that you don’t know you have them.

And then, there’s the ongoing clash between creativity/innovation and convention when designing experiences that are good experiences (I’m trying to avoid the words ‘easy’ and ‘usable’ here, because sometimes learning an interface is pleasurable. When is convention the right way to go? And how do you ‘test’ whether something new that needs to be learned is adequately usable?

Beware the assumptions. Step away from the nut.

2 thoughts on “monkey lessons (step away from the nut)”