OK, there are two important first steps you need to take when contemplating a design (or, in this case, a redesign) – understanding what the business/organisation wants the design to achieve, and understanding who your audience/customers/users/potential users are, and what they want to achieve, what their goals are.

A really common way to capture this information about users is in the form of personas. The personas can then be referred to throughout the design process to test that what you’re designing is actually the right thing for your end users, and to help you to prioritise functionality and content on the site. Basically, to stop you trying to be all things to all people, which as we know, is the fast track to failure.

Now, I’m the last person to suggest that personas are highly scientific (although some people do work very hard to make them statistically sound) – to me, this is not the best way to spend project time. It is imperative that personas are based on research though – going out and actually meeting a bunch of people who form your target audience, because very often, the personas you need (or, at least, the way you ‘break down’ your audience) is what it might first seem.

The Drupal Community put together some personas a while ago, featuring characters like Mary the Manager, Tim the Tool-User, Wendy the Webmaster and more. As you can probably guess, they are based on the ‘role’ that users are playing in relation to Drupal. At first blush, this seems like a logical way to segment the Drupal audience.

It is an important segmentation but – as I’ve discovered over the past few weeks – I don’t think it’s the most important one. Firstly, as we saw in our survey, and this was supported by what I heard when talking to members of the Drupal community, very many Drupal users work across a range of different roles. They do some developing, some designing, some decisionmaking, some sales… all kinds of things. I don’t know this as a fact, but I’d hazard a guess that the ‘pure’ Drupal developer is actually a minority. Just a guess.

At any rate – it doesn’t really make sense to have Danielle the Designer as a persona we’re designing for because Danielle is much more likely to do some code, some design, some content administration, some dealing with clients. The role based persona doesn’t accurately reflect the kind of people we’re meeting out in Drupal-land. 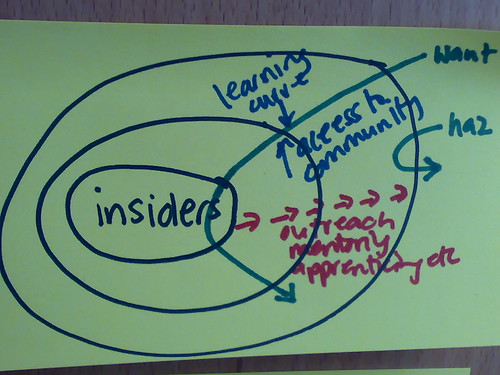 I think our audience segmentation for Drupal.org should actually be a lot simpler than personas – it’s about ‘outsiders’ and ‘insiders’ and the path that people take from their first encounter with Drupal.

Insiders are those of you who are close to the Drupal community – who know and love Drupal and the people who gather around it. You understand ‘Drupal-speak’, you know who’s who in the zoo, you ‘get’ open source. You’re clued in, and you’re also incredibly important to the ongoing success of Drupal – both through the project work that you’re doing (if you’re an ‘insider’ you’ll know what I mean by ‘project work’, if you’re an outsider, you probably won’t – see, Drupal-speak in action, I’m rapidly being indoctrinated!). Also through the community work that you’re doing – Drupal ‘insiders’ are critical to getting people over the ‘brick wall’ I was talking about in our Experience Strategy, they are the people who help ‘grow others up’, or to educate them in the mysterious ways of Drupal. They’re very important people.

They are most likely to be, but not exclusively, developers. Or, at least, to have written code in a past life. This is why Drupal-speak is very much techy-speak.

Outsiders don’t know much about Drupal, although they have have installed it and gotten a site (albeit ugly) up and running. They may not know what a module is, although they may have posted on the Drupal forums seeking help. They definitely don’t know about the IRC channel where the insiders live. They are facing a fairly steep learning curve (including learning Drupal-speak!). They haven’t ‘hitched their wagon’ to Drupal – yet. They might get a better offer elsewhere.

Along the engagement pathway:

Some of you will identify as Insiders and some as Outsiders, but very many will fall somewhere along one of the ‘engagement’ pathways I’ve scrawled in the picture above. Some of you know a LOT about Drupal, but you’re not a developer so you don’t feel like you’re a ‘proper’ insider. Some of you are well on your way to becoming an insider, having gotten access to the right tools and – more importantly – the right people! Some of you used to be much more of an insider but have other things on your plate at the moment that have drawn you away a little. Some of you have tried to head down the engagement path, but are being thwarted or scared off.

As we move forward with the redesign, this is the model that I’m suggesting we use to evaluate the work we’re doing – to consider this engagement pathways and to plot some key points along it and to see whether what we’re suggesting is going to support users at each of these points on the pathway.

This way, we avoid designing only for those of us who are loudest (and probably most engaged in the community), and we maintain a focus on the range of experiences we need to support on drupal.org – maintaining focus on what matters – the people who use the site, rather than the technology, or the tools or anything else that needs to be wrangled into a good user experience.

What do you think? Does this make sense to you?