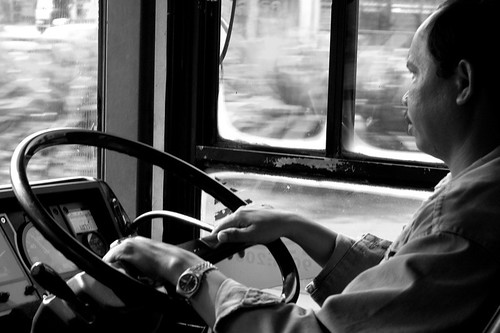 If you were in Sydney a few years ago, you might remember the best ever example of industrial action that I’ve ever seen. Rather than pulling another last-minute bus strike in peak hour and leaving people stranded in the morning unable to get to work, the bus drivers decided to run the buses – for free. Their industrial action was to refuse to collect fares. What a great way to get the right kind of attention – from the public AND from their bosses.

I’ve never understood why industrial action so often involves pissing off the people you want to support you – by striking, or holding protest marches through the city at 5pm.

I’m not really sure whether the bus drivers got what they wanted, but I do know that for quite a while, every one in Sydney was totally backing the bus drivers. They were the most popular guys in town. I bet their work was pleasant for those few weeks.

I was reminded of those days of free bus rides this morning, when I scored another free bus ride. This one was much less pleasant though, because the bus driver did NOT take the opportunity to create a positive user experience.

So, most people who commute on a bus have a bus pass that is read in one of two ticket readers at the entry way to the bus. See the little green machine over there? You dip in your ticket to validate it, and then you go take a seat. This morning, both of the ticket readers were broken.

Now, *some* bus drivers see this as a cause for celebration and announce to all and sundry that the bus is free today. Hooray. We’re all happy and we file quickly onto the bus and take a seat.

Not this morning’s bus driver. This morning, the bus driver didn’t seem to think that it was worth mentioning that the ticket readers weren’t working, so person after person, bus stop after bus stop, he let people get on the bus, take out their tickets, try to insert their ticket in the first reader… try again… try again, then try their ticket in the OTHER reader, and again. Until he eventually grunted at them to let them know that they weren’t working or until the person gave up and went and took a seat.

Two different modes of communication and two very different outcomes. Even though, in the second instance, people were also getting a free bus ride, they weren’t happy about it. Trying to deal with the ticket readers was annoying and time consuming, they’d been made to feel that *they* were wrong in either hen had to watch ever other person getting on the bus experience the same frustration, making the bus trip much slower than it needed to be.

So, what was the difference between a good experience and a bad experience?

Let’s think about this from a user experience perspective.

The user base consists, almost entirely, of power users. These people do the bus every day. They almost always catch the same bus every day and probably try to sit in the same seat. They buy weekly tickets or travel passes. Only in extreme situations would they use cash, and then they would have the exact change.

Every day, it’s more or less the same deal.

Rinse, repeat on the way home that night.

So, when one of the five simple steps that the user performs twice a day suddenly changes, this could be either a good or bad experience.

How to make it a bad experience?

How to make it a good experience 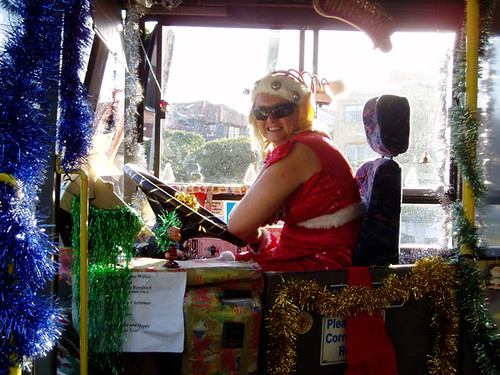 Here’s an example of a bus trip that I paid for where the bus driver created an amazingly positive user experience for everyone involved, at one of the stressiest, busiest, grumpiest times of the year.

You should have *seen* how chilled out and happy her passengers were (once they got over their initial shock at the streamers and tinsel and other decorations inside and outside the bus – more pics here).

And she was well rewarded for her efforts, if smiles and waves and chats and thanks count for anything.

And, I think there’s something in that for all of us (who say we’re interested in user experience).

What have you learned from your bus driver lately?

6 thoughts on “Good experiences on a bus (another instructional analogy)”