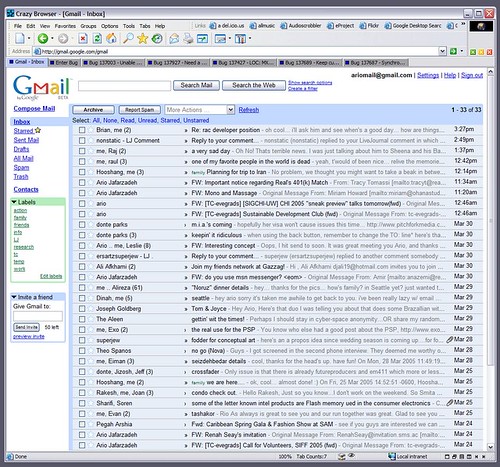 Does your gmail inbox look like this one? Mine does.

Does having a never-ending, never-empty inbox stress you out? Yeah, me too.

Did you know *you* can have a beautifully clean, empty gmail inbox with all your emails beautifully filed away, out of sight where they’re not going to make you feel anxious? No, me either.

In fact, I just got half way through a ranting post about how unproductive the Gmail inbox was and how it made me feel stressed that I was forgetting or losing something and then I discovered…

I had to do a Google search, then read a whitepaper on using Gmail for GTD (Getting Things Done), then test it out in Gmail myself, before I actually discovered this. But, the good news is – it’s true. So now I have a few thousand emails to label and archive and a stress free, productivity enhancing inbox will once again be mine. Hoorah.

ok. Now for the vent…

Who was the crazy person who thought that ‘Archive’ was the right word for that button? And then who approved it? Did this get tested with users? How many? Who are they?

When you think of Archive, what associations does it carry for you?

For me, when I think of archive, I’m thinking of documents that have gone to a ‘special place’ often in a special format (where else do we still use tape, i ask you), that have gone there because we either don’t think we’ll need them anymore OR because we might need them in the future so we have a backup.

They’re typically hard to find, hard to access, hard to restore. They’re for the future… preferably future generations. They’re not intended for next week.

You sure as hell don’t get to my idea of archive using a simple keyword search!

What is the right word for this button?

Like I said before, what it actually means is ‘don’t show in my inbox anymore’. I’m thinking ‘File’ might be an alternative, but it’s got all those ‘file, edit, view’ assocations, so probably not a good option. Maybe ‘File Away’?
The folder metaphor doesn’t exist in Gmail, so we can’t use something like Outlook’s ‘Move to Folder’. Maybe it is something like ‘Remove from Inbox’ or ‘Don’t Show’ – maybe not… it would be preferable to have a positive label rather than negative here. This is nice functionality!

Hrm… so off the top of my head, I’m not sure. Anyone feel like workshopping it here and we’ll email Google and ask them to change it.

I’m not sure if I’m more relieved to have found it, or angry at how it’s been labelled… but one thing is obvious. Labels matter. Let’s spend some time making sure we’ve got them right and that our audience understands it.

– Am I the only one who didn’t get the archive thing?

– How would you label that button?

14 thoughts on “Gmail inbox and productivity (or Archive? my a$$)”