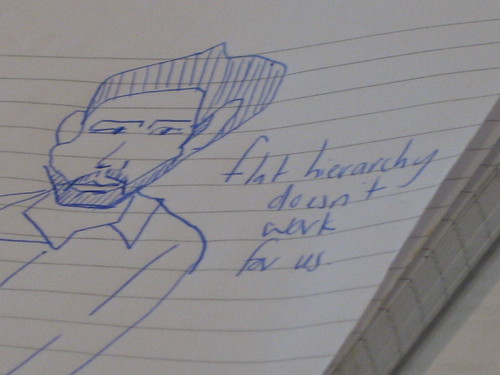 Last weekend in Berlin I attended the 2nd EuroIA Conference themed ‘Building Our Practice’. In retrospect, it was a valuable experience, although there are a lot of opportunities for this conference to improve.

Around 200 people attended, most of whom practiced Information Architecture as a part of their work. Attendees were from all over Europe, and a significant proportion had languages other than English as their native tongue.

Despite that, there was little or no concession made for the multilingual nature of the event. The conference was conducted in English – which was just as well for me (there’s nothing like being in Europe to make you feel like a neanderthal for speaking only one language) – and understandable as English was the common tongue. Yet I couldn’t help but think that it seemed kind of strange that the proceedings were, well… so English.

Now, nobody tries to pretend that Information Architects are the cool kids of technology, but the absence of schwag kind of set the tone. (Perhaps I had high expectations after BarCamp London and the multiple free t-shirts?) Add to that the fact that the conference was held on a weekend, and you get the kind of utilitarian feel that was present throughout the conference.

This was heighted by the format of the presentations which were almost entirely ‘speaker on stage with powerpoint slides preaching to the crowd below’. There was, of course, the odd panel and the poster session. This made the relatively unconventional presentation by the FramFab/LBi boys (I never did quite figure out what was going on with those two brands) on Wicked Workshops particularly refreshing (it had a double act presentation, included music AND everyone in the room standing up and breaking into groups for a short brainstorming exercise). Hoorah!

And a great topic too – making workshops more effective and more fun. Hoorah to that – if only they had more time so we could have learned more about the actual techniques that they used, rather than their ‘framework’ (lots of people at this conference had a ‘framework’ to share with us… apparently Frameworks are the new black).

Unfortunately, the ‘high level’ factor was a problem throughout the conference. I found many of the presentations somewhat frustrating as they tended only to skim the surface of their topic, rather than getting down and dirty with the actual application of the ideas. Too few people gave *actual* examples of their work, or talked specifically about how we can apply their ideas in practice. And very few people took a strong position on any kind of potentially controversial topic.

This made me nod and smile quite a bit when I read Adam Greenfield’s rejection of the Information Architecture community.
Many of the talks given could easily have been presented to an audience with just a cursory understanding of Information Architecture. I’m sure I’m not the only one in the audience who didn’t need to be told that content was important, or that calls to action made people click where we want them to. I wanted more specifics – what is good content and what sucks. Just *how* do you design an effective call to action. (These are just a couple of simple examples that spring to mind, don’t focus on these). I wanted DETAIL people, detail! Instead, I often felt as though I was given IA platitudes.

(I know, if I have a problem, I should submit a proposal and get up there myself. If I knew I was going to be in Europe at the time of the conference, perhaps I would have. I have hopped up at conferences and spoken and I have submitted proposals – I know how hard it can be, and I do appreciate the bravery and the effort made by the speakers. I’m hoping this comes across as constructive criticism).

Peter Morville opened proceedings with the keynote speech. I’ve been following Peter’s work with interest for a while now (I mean, who hasn’t read the Polar Bear Book). This meant that most of what Peter had to say seemed pretty familar to me.

A few ideas he spoke of resonated with me, including:

Peter also made an intriguing note about wikis and IAs (there is a popular idea that wikis mean that everyone is an information architect these days). Peter implied that the fixed navigation of the ‘inverted L’ of Wikipedia (which has been formally ‘architected’) is the reason that Wikipedia projects a sense of authority.

I thought that was kind of odd, because for me the interesting thing about Wikipedia and IA is that the information design and architecture in the content section of the pages is remarkably good, considering that it’s been designed by community. Someone should right a paper on that! (yeah, yeah, I know. I’m really busy right now).

Don’t worry. I didn’t take that many notes on all the speakers… I’m not sure why I did with Peter.

Next up – Eric Reiss. Eric opened by threatening a striptease. Of course, in typical IA fashion, it ended up just being taking of a collared shirt to reveal a t-shirt. (Which I think said something funny in German, but I missed that).

Eric was, however, one of the daring speakers who did actually take a position and defend it as he identified Seven Trends in IA.

Possibly one of the most contentious/interesting assertions of the conference was the idea that strategic or ‘big’ IAs are drifting away from actually practicing or ‘little’ IA and that this is potentially problematic. Partly because it means that ‘little IAs’ end up being unimportant ‘grunt’ workers (my terms, not Eric’s), and big IA’s get much more important but have less clue about what it actually means to *do* Information Architecture, so are less likely to be doing a good job as Big IAs.

I hear what he’s saying, and I find that I have to make more and more effort to ensure that actually practicing IA remains a part of my role – I hope that it is always a part of my role, even though I do really enjoy the strategic aspects of the role.

I wonder – does anyone see themselves as purely a ‘little IA’ in the long term? Or is it more like an apprenticeship and we all gradually progress as far into ‘big IA’ territory as we choose to?

The subject of strategy in the larger business sense was a key theme of this conference (not by design, I assume). There was lots of talk of IA’s being a logical choice to guide/contribute to strategy greater than just information architect (because we have a useful set of skills and access to lots of parts of the business). I had to laugh as the talked of IA’s muscling in (well, as much of 200 people who, we later discovered, don’t go to the gym, can muscle!) in on all kinds of other roles, only to yelp at the idea of those pesky planners in advertising agencies muscling in on strategy. How dare they! :)

Olly Wright spoke well on the topic of Strategic IA, but my favourite concept from his talk was quite simple. Olly advocated making nicely designed diagrams to communicate your IA strategy – even using graphic design resources if, like me, you’re not good at pretty. Olly says – if you can’t draw your IA strategy, then your strategy isn’t clear. Hear hear.

OK. Now I’m getting as bored of this post as you probably are, so I’m going to wrap it up for now.

I am, however, really looking forward to sharing some thoughts with you on the closing keynote from Steven Pemberton, who I’m embarrassed to say I hadn’t heard of before he hopped up to speak. Lots of juicy stuff and lots that I knew nothing of before… oooh! I just wish I wasn’t too exhausted to tell you about it now!

photo: thanks to Marg for the illustration. She did drawings of everyone who spoke… unfortunately the cleaner took her first day of notes/drawings so only a few remain!