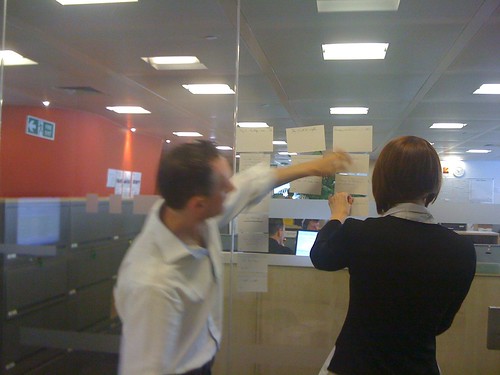 I’m in the midst of our first sprint on the ‘publishing tools’ project at the Economist, wherein we’re defining interface designs for the ongoing migration of economist.com over to Drupal 6. hurrah!

There is no sprint zero in this project and no time to consider the overall environment design, we’re going to be approaching this incrementally throughout the project, so instead we’re ploughing headlong into proper interface design, and the first few sprints are dedicated to designing publishing tools to allow a group of editors to update what are known as the Channel Index Pages (experimental versions can be seen on economist.com now here and here for example). They’re not much to look at just yet but designers in the New York office are hard at work wireframing and designing up much richer and more exciting!

So, Sprint One dives straight into research and interaction design, I work three days a week on the one week sprints and the format we’re using goes a little like this:

This week I spent the day talking to Channel Index Editors (who update the website pages) and Section Editors (who edit the print version of The Economist). The interviews were a mixture of me getting to know who is who and what they do, understanding the way The Economist as an organisation works, the publishing processes, perceptions and concerns re: web vs print content production and quality, and getting walkthroughs of some of the current software in use for both web and print production.

There’s no time in the schedule for formal research analysis so it ends up as a page of scribbled notes at the end of the day that, as it turns out, is already serving as a really useful reference point. Some of the scribbled bullet points included:

My second day on this sprint kicked off with a Scrum Sprint Planning Meeting – much standing up, reviewing backlog, breaking down stories into tasks and guessing hours.

It’s always a kind of tricky process for design work (and probably for other kinds of work too) because the tasks seem to be so mixed up and messy in a lot of cases – what I say I’m going to do (theoretically) and the way they actually happen aren’t necessarily the same – but it seems to work pretty well here, mostly because the team are pretty flexible and very interested in making design work in a Scrum environment.

Then it was onto some design work – lots of sketching, some prototype building, rinse & repeat until I had to head out for another user research interview.

Day Three: Design, and setting up next week’s research

Day three was all about building my ‘demos’ for next week – demos are a requirement for the Scrum methodology and we have to have something to show at the ‘demo’ session each week and, of course, they’re also what I’ll use in my next round of research, which is day one of the next sprint and which I set up with a few of the people I’d met earlier in the week.

At the moment I’m building my prototypes in Omnigraffle – mostly because I’m using a mix of wireframes and screengrabs and it’s the fastest, easiest way I’ve found to do it – and then just throwing it into ‘presentation’ view makes a great format for use in user research sessions.

One of the big issues I’ve been dealing with this week has been the environment for the content management to take place. The project team I’ve come into have a strong preference for ‘in place’ editing, and I’ve been pretty cautious about taking this approach because it can be difficult to manage complex editing tasks in this environment and because there’s been no indication from user research that it is necessary or beneficial.

At the end of day three I’ve got two prototypes ready for Monday – one is a traditional ‘Admin System’ interface with some simple ‘in place’ editing on Preview and the other is almost entirely ‘in place’ editing. We’ll see how they go in testing on Monday and what we see there will guide the decision making going forward.

Unlike the D7UX project, the technical team here are not at all daunted by the prospect of trying to make Drupal do some pretty serious in-place editing (it’s a different story of course when you don’t have to worry about Core!). Time will tell whether they’re just an overly optimistic bunch or not :)