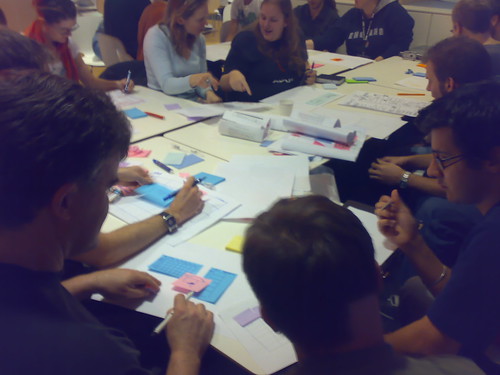 For my recent BarCamp session I shared a design technique that a colleague and I developed quite recently that we’ve found to be quite successful in both generating great design ideas and developing consensus about the design approach for projects within a multi-disciplinary team.

We callÂ this techniqueÂ Design Consequences, due to the similarity it has with the similarly named childrens games. We tend to use it in the earlier stages of the design process, although it can be used for more detailed interface design problems.

So, how does it work? It’s pretty simple really.

It’s a good idea to capture as much of this as possible as you go around the group. Of course, the best way to do this is to write up ideas onto post it notes as you go and stick them on the wall. There should be an ‘in’ section of the wall and an ‘out’ section of the wall. (‘In’ means that the idea has legs for this particular design problem). Affinity sorting on the run also helps to draw out the key themes or ideas that have emerged from the exercise. You should be leading the group discussion, helping the group to gain consesus and make decisions as to the design approach to be taken in solving the design problem, and trying to document these decisions as you go.

This process can be quite time consuming and intense, but more often than not there will be a few key ideas that the group is particularly enthusiastic about and that really propels the decision making.

By the end of the session you should be in a position where everyone is in agreement about *what* will be included in the wireframes that comprise the next phase of the design process.

Why would you use this approach?

So, there you have it. Some quick notes on a technique that’s been quite useful for me lately. I’d be interested to hear what you think of it and if you try it, to see if you too find it useful.