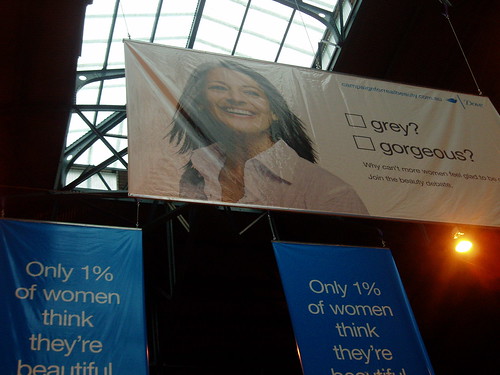 On walking through Central Station the other morning, I couldn’t help be struck by the new campaign that Dove (owned by Unilever) have launched, called the ‘Campaign for Real Beauty’. It’s actually an international campaign, but the latest version has just hit Sydney with a high impact plastering of outdoor promotion at one of Sydney’s busiest train stations (and elsewhere, I’m sure).

They describe this as an integrated-marketing campaign that undermines the basic proposition of decades of beauty-care advertising by telling women – and young girls – they’re beautiful just the way they are.

I think this is a smart and intriguing campaign.

Obviously there are a couple of *almost* contradictory objectives:

This is an interesting case study for the problems that FMCG products will face as they attempt to embrace 2.0 advertising. They have a media and marketing literate target audience who will struggle to not see campaigns such as this as a cynical attempt to ‘own’ (and thereby brand) an ‘issue’… so that despite the fact that they may ‘do good’ by growing awareness around these issues, at the same time, we know that they wouldn’t be doing it if they didn’t think it would be effective in growing brand and shifting product. So, it’s not an entirely satisfactory, authentic brand experience, is it?

only 8% of Australian women are satisfied with their facial attractiveness
Source: Dove Global Report

But, back on topic, why might the Dove Campaign for Real Beauty be considered a 2.0 advertising campaign?

There are a few things that make it feel 2.0’ish to me:

a) The Voice: Throughout the campaign, there is an absence of the typical ‘expert’, condescending voice that you typically find in (particularly beauty-care) advertising. In this campaign, the voice is primarily asking for your opinion, asking for your feedback, and reporting research data. There is an absence of ‘spin’, there is no ‘offer’. The voice sounds honest, and direct, and educational. To me, this is a 2.0 kind of voice.

If it were *true* 2.0, though, would be multiple voices, and they would come from the community, they would feel less ‘edited’, and they would be more substantive. This voice still operates in sound bites, and it’s not quite authentic. It’s far more 2.0 than a Chanel advertisement, that’s for certain.

b) The Content: There is no ‘product’ in this campaign. There’s not even the slightest mention of a product. There’s a link through to the product site from the campaign site, of course, but even that’s quite subtle. That’s a pretty brave strategy for what is essentially an FMCG brand.

Apparently the US version of this campaign had as part of their mission ‘inspiring women to take great care of themselves’. This doesn’t seem to be present in the Australian version.

The content of the campaign is educational and interactive. Using facts and case studies, the audience is given an insight into the tragic absurdity of body image and other beauty issues that impact so many women’s lives on a daily basis. There is an attempt at community building through the use of a discussion forum.

c) The Participation (interactivity): Both the outdoor messaging and the website throw questions at their audience, encouraging discourse both with the brand and within the community. This is mirrored by the participation encouraged on the website – both through polling and through asking visitors to ‘share their views’ on a discussion forum.

They’re definitely heading down the right (2.0) track with this approach. Unfortunately, you can almost see the tumbleweeds rolling through the forum, and there’s little evidence of any user participation on the site.

Here’s where I think Dove have not quite gotten on the 2.0 bandwagon… they haven’t quite nailed the community building.

I *have* to divert into user experience commentary for a moment and say that a big part of this could be because of the awfully designed interface for the online forum. The ‘post a message’ button is all but hidden in small light blue HTML on a white background, and the posting statistics are equally obscure. The actually conversation is hidden ‘below the fold’ thanks to the frame that the designers have used to minimise the footprint of the site …. really bad idea.

There are only a small group of people who want to ‘soapbox’ about a particular issue. Mostly, people want to participate The content of the campaign is educational and interactive. Using facts and case studies, the audience is given an insight conversation going on. At the time of writing, there were just 20 posts across three topics on this website… and, I’d hazard a guess that the majority of them have been seeded (posted by people who are involved with the campaign, or friends of these people who have been prodded to participate). I’m really interested in this subject matter, but there’s nothing inspiring about this community, and I’m not inclined to spend my time posting to a great abyss.

So, what should Dove have done?

So, let’s run this campaign again. What kind of things could we do differently?

And, that’s just the most obvious fixes. There are no shortage of ideas that could be explored with a campaign that has so much 2.0 potential.

So, congratulations Dove. I *really* love the concept behind this campaign. Next time, perhaps, you might spend a little more time thinking about the opportunities that the the ‘new’ web can offer. (Oh, and spend a bit more time on the interaction design… it *really* does matter). It’s all in the execution, after all.

So, over to you, conversationalists.

Have you seen the Dove campaign? What do you think – 2.0 or not?

What other campaigns might you describe as 2.0 and why?

3 thoughts on “Campaign for Real Beauty – 2.0 Advertising from Unilever?”