So, one minute you’re enthusiastically selling toffees at recess at school to raise money for Fred Hollows Foundation, and the next minute you’re thirty something and can hardly be bothered to vote. How is it that so many of us become so disengaged with the issues that affect us, our families, our community and our world?
Keeping young people engaged and active on the issues that matter to them is the mission of ActNow – the latest inspirational program from the Inspire Foundation.
Isn’t that a great mission for a 2.0 site? Yes? Well, don’t just sit there. Act Now! Tell your friends, tell your friends’ kids, write about it on your blog. Get busy. Please :)
I had a flying trip down to Melbourne yesterday for the launch party. When I was producing at Massive I had the pleasure of working on this project and it is exciting to see ActNow move out of beta and into the wild. I’ll be watching (and reading) with great interest.

ActNow is not your average old website – it’s really quite 2.0. You’ll find many of the 2.0 buzzwords in action on the site including User Generated Content (come up with a better buzzword and I’ll use it), RSS, Social Networks and more. It’s based on a Wiki format, where members can create their own pages using a range of different templates, and create or upload content – written word, photos, video, Flash movies, you name it.

Members can go back and edit their content whenever they like. They can also give permission to other members to edit the content. So, if you’re putting a page together about Obesity, and there are a group of you doing research on the issue, you can all contribute to the content that goes on the page.

As you can imagine, this was the topic of *much* angst. Letting anyone put whatever content they like on the website. It’s a scary thing to do. As you can imagine, the lawyers were terrified. But, trust is a 2.0 thing too. We needed to have faith in the community that would build on ActNow and trust that people will use the powers given to them for good and not evil.

Throughout the project we had a little mantra that I borrowed from Peter Merholz of Adaptive Path.

”The Web’s lesson is that we have to let go, to exert as little control as necessary. What are the fewest necessary rules that we can provide to shape the experience? Where do people, tools, and content come together? How do we let go in a way that’s meaningful and relevant to our business?”

Time will tell if this risk pays off. Of course, it will be a pretty quick task to get rid of these freedoms and to build in a more onerous moderation path… but who wants that? Certainly Inspire don’t need the extra work, and it takes away that ‘magic’ of the internet, which is that you press a button and it’s suddenly there for the world to see.

Moderation is boring. So, we’ve taken the approach of distributing moderation – on all of the content pages is the option to ‘report’ content – meaning that the ‘official’ moderators only need to look at a few pages (hopefully) rather than check off every single thing that goes on the site.

I’m fascinated to see how this plays out.

That beautiful homepage is pretty cool too. It looks like a tag cloud, but it’s actually not. (In fact, no tags were used in the making of this site… so, perhaps it’s not really 2.0 afterall ;) – don’t you worry, they *were* discussed at length but we opted out).

So, those things that look like tags are actually the names of the various issues that people are writing about on the site. The ones that are being viewed the most are shown in the cloud on the homepage, with the most often viewed shown in the largest font size and less often viewed in gradually smaller font sizes. Cool huh.

(Don’t you love it when XML and Flash play so nicely together?! Cheers to Damian and Dom for their technical brilliance and many hours of hard work)

What we’ll get to see over time is what issues are most important or interesting to young people. Also, when something big is happening in the news we’re expecting that this will probably be reflected on the homepage cloud, making it really easy for people to get straight to the content they’re interested in.

It also allows you to get a quick preview of all the top issues from the homepage, thanks to the little preview box.

Lots of crazy stuff, hey? Will the young people be able to use it? We can confidently say yes. You see, this site has been designed in concert with the people who use it, and they’ve been testing it and testing it for months now. Lots of them!
The project has already involved more than 100 young people, participating in ‘incubators’, as interns, helping to develop content and start build the online community.

Working on a project with the Inspire Foundation is a real exercise in participatory design.

The young people have a really active involvement in deciding how the website would work. They used online forums and face to face meetings to discuss everything from what kinds of content the site would need, to how to best group this content so that people could find it. 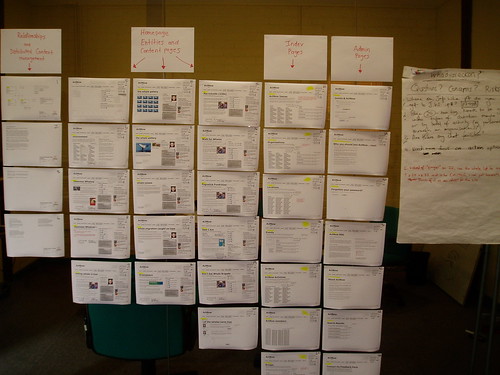 They not only *read* the specs, they pored over the wireframes and held workshops. Never before have I walked into my client’s office and found my wireframes stuck up on the wall like this! (Obviously I was so excited I had to capture the moment!)

At every step, the young people were involved in decision making, and were our go-to point when we needed to decide if an idea was going to fly or not. So, even though they didn’t necessarily know what a wiki was, or what and RSS feed was – they took the ideas we suggested and evaluated them and they decided whether it was in or out and how they wanted it to work.

It’s a great way to work, and particularly good when you’ve got such a tough target audience. I don’t think I’d ever want to work on a youth focussed site again without having access to a bunch of people in the target audience to guide what I was doing and to act as a sounding board for my ideas and approaches.

It should be like this for *all* projects… but, in reality, it rarely is. (Unless you’re working exclusively on Intranets, in which case you have no excuse!).

Now what it needs is a vibrant community – which I’m sure it will get if enough young people know about it. So, pass it on.

(Either that or make a cash donation to Inspire ;) )

One thought on “ActNow Launches (2.0 for good not evil)”